SNOW DAY!…(again).  Where was this snow in December when I wanted it?  Now that it’s March, seeds in the ground, it’s hardly the ideal weather.  However, it is giving me the opportunity to catch up on…this?  Yes, this and a few other things that I’ve been meaning to do.  We have had some cool volunteers come and go since January, so let me take some time to let you know about them. 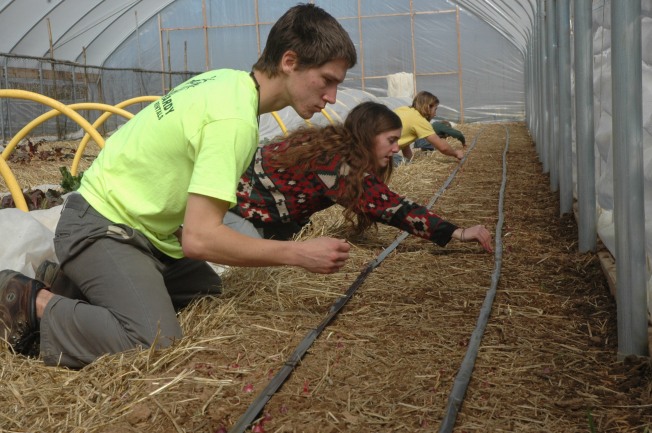 This is Evan (Ohio). Megan, and John(California).  They were all here around the same time, late Jan., early Feb.  Evan is still around, but will leave us April 1. 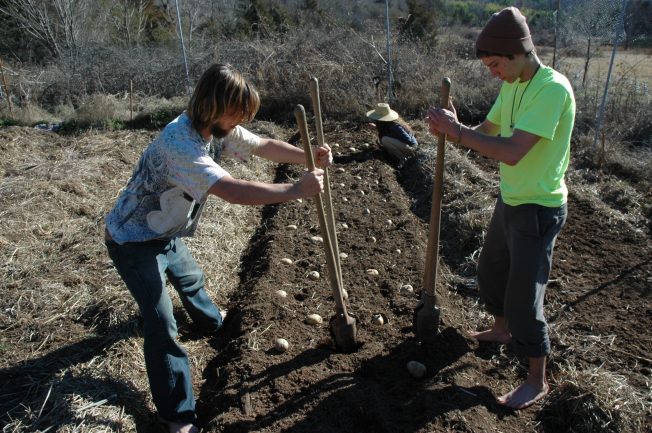 They did all sorts of planting, seen here putting in potatoes. 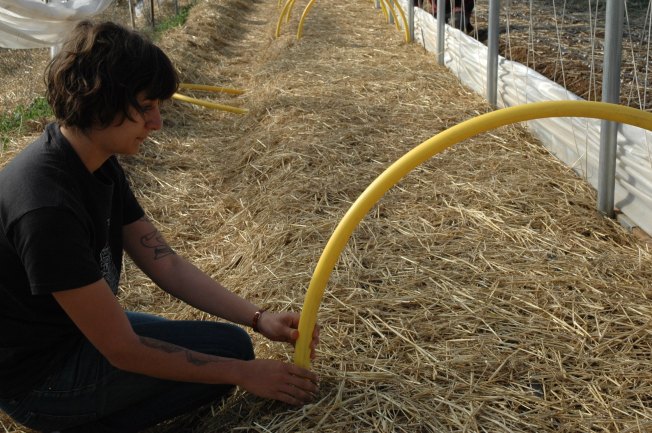 Jennan came here from Austin for her Spring Break.  Although she was only here for a week, she helped on a lot of tasks around the farm. 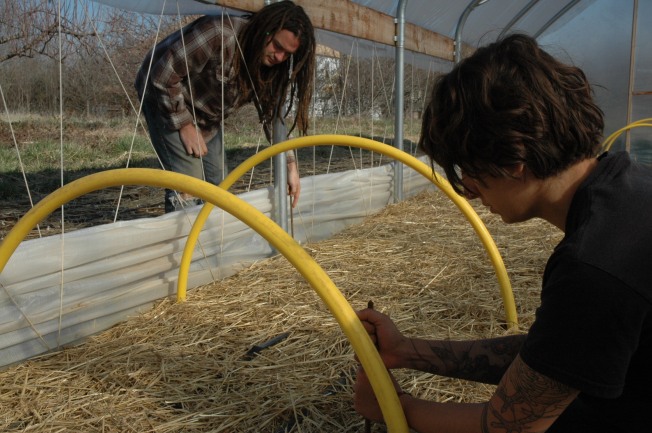 This is Brian, he’s local, but really interested in the farm way of life.

We’ve been planting, and taking time out here and there because this spring it is actually acting like spring!  It’s been a few years, right Arkansas!  The last few years, it got warm very early, good for crops, not for bugs.  Hopefully this will make our summer more mild…I’m no mystic, but I like to be optimistic.  (rhyme time!)  But we are back to our usual up and down weather pattern typical for this area.

What I love about winter, being in this farming profession, is that it is the one time of year that you can put your feet up…for a week or so.  December 18th, we said goodbye to the last WWOOF’ers of the season, and have been blissfully schedule-free since then.  That however, doesn’t mean that nothing has been going on.  Paul has been outside combing over the landscape, planning for this forthcoming season.  The kids and I have been holed up, homeschooling, and enjoying the moments together.  The grind will start up again tomorrow, or possibly Monday, when the first WWOOF’er of the season shows up.  I’m not even sure of his name, but I think he’s from New Mexico.  Bring it on!  It’s just crazy to think that it’s beginning again already.  No break is ever long enough when you work so hard for most of the year.  So, I’ll take these next few hours to revel in the…chaos?  One other important bit of info that has happened since the beginning of the new year is that I have eliminated wheat from my diet.  So far the results are great.  I feel amazing.  I decided to do this, because I had developed allergies last year, and the more I researched, wheat seemed to be a big red flag in people’s diet that leads to allergies.  The first three days were rough to say the least.  I didn’t expect a fallout, but it happened, and it wasn’t pretty.  The other day on the Colbert Report, they did a whole bit on how kids shouldn’t eat wheat, and how bread is just as addicting as crack…this explained everything!  Google it readers, I’m glad I did. 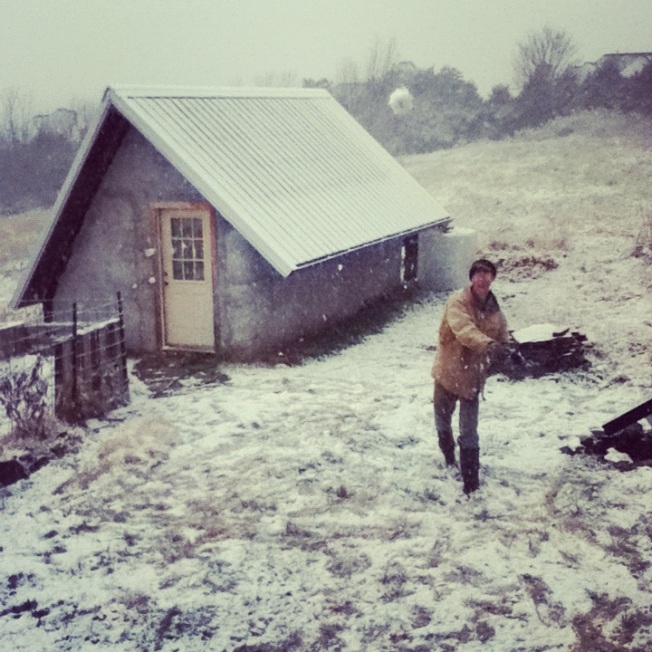 I delivered the last round for our fall CSA.  It was sad, for me…that was a great route.  Everyone, although I didn’t see you very much, it was a pleasure.  In case you were wondering, our CSA starts up again in April.  Tomorrow is a new day.  A day to do nothing…but the dishes, and the laundry and cook, and….and…. 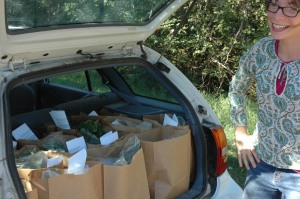 I was thinking about this moment right now!  It will be a nice break!  See you in April Fayetteville!

Today we said goodbye to the last WWOOFers of the season, Sunny and Lan.  What a joy it was having them, as well as everyone else this season.  Without the help of strangers, Paul and I wouldn’t be able to do what we do.  A person can say thanks all they want, and possibly still not get their point across.  I feel like I couldn’t say it enough to prove how much I mean it.  So, I’ll just type it: thank you.

It’s bittersweet, the whole WWOOF-host thing.  All of these people who come into my life, impact it in some shape or form, and then they leave…onto the next farm, or just moving on.  Just so you know WWOOF-pack, it doesn’t get any easier, saying goodbye.  I wish you all now like I did during our ‘See you later’ speeches the best of luck.  And please, come see me.

Tomorrow is the last delivery for the Fall CSA, and Paul and I are going to be very busy harvesting, packaging and delivering food tomorrow, our heads will be spinning.  We’ve been doing the whole CSA thing for 34 weeks straight.  It’s been a lot of logistics, and long days, which turns Wednesday into Friday.  This Wednesday will be interesting, there will be no one else to cook for except my family, no casual conversation except for my family, WHAT ARE WE GOING TO DO!  We still have game night…(which by the way Pat and Pakis, I’ve won 5 in a row, come challenge me!) 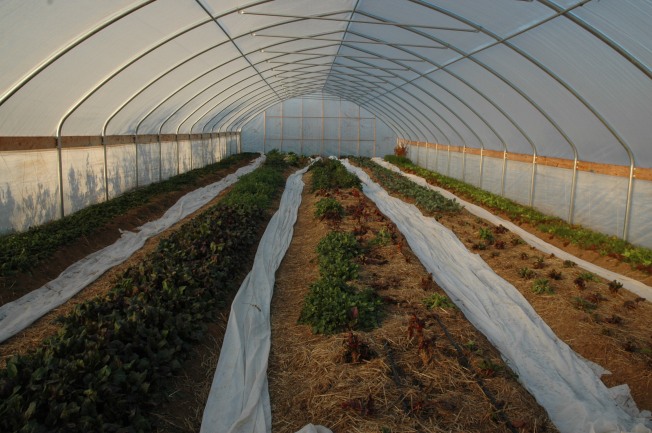 It took me a week to get these photos up, but good things come to those who wait.  If you don’t see yourself here, it’s not because I didn’t care…Thank you too! 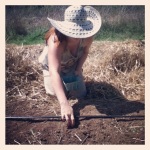 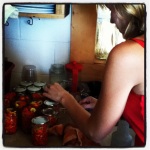 It’s been a long season, and it wouldn’t have been possible without the generosity of strangers, who turn into friends.  Thank you to WWOOFUSA, as well as WWOOF, for helping farmers and volunteers connect!

You know it has been a long season, when your plants start producing magical, yet comical fruits.  They must be saying to us, sit down and have a laugh, it’s almost over. 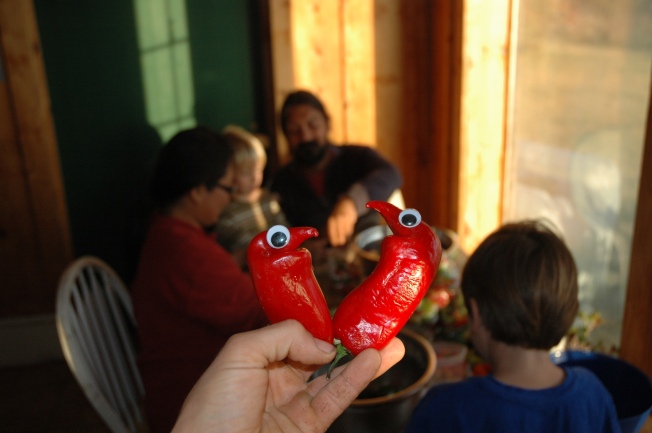 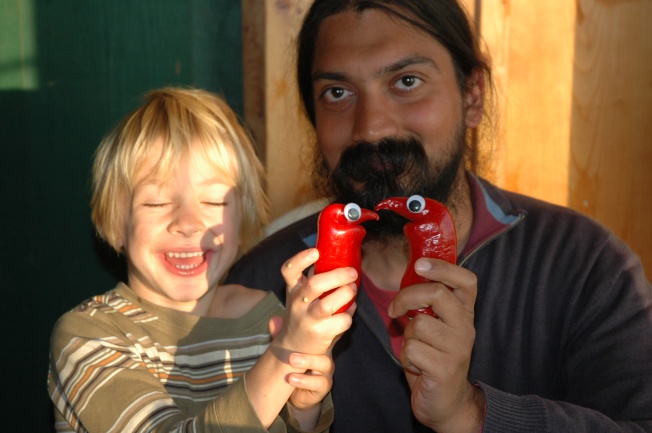 Not only are there penguin peppers, but peppers with funny noses: 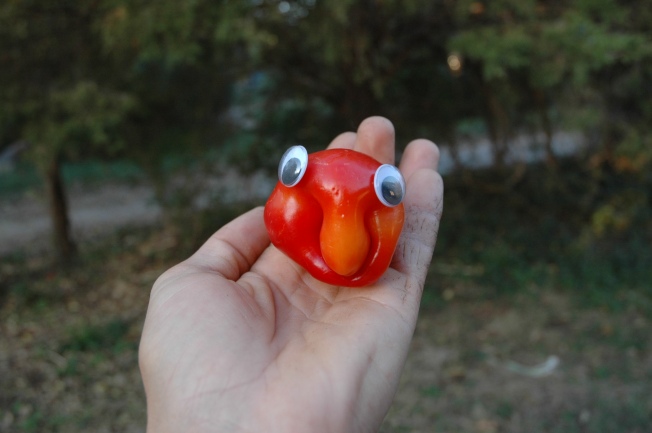 These peppers are doing their job, showing us that plants can have a sense of humor too!

We’ve been really busy here on the farm, our main project right now, on top of EVERYTHING else is re-erecting the Mothership.  If you aren’t a 2-greenthumbs superfan, let me fill you in.  Last march our hoop house, the Mothership, was blown down in what we later found out was a F1 tornado.  Look back into my archives, there were pictures and tears shed.  But NOW we are putting a new Mothership back up, better than ever.  There were lots of hands involved in this, there are some pictures on my other farm blog Ozark Alternatives and I will add some more here as well. 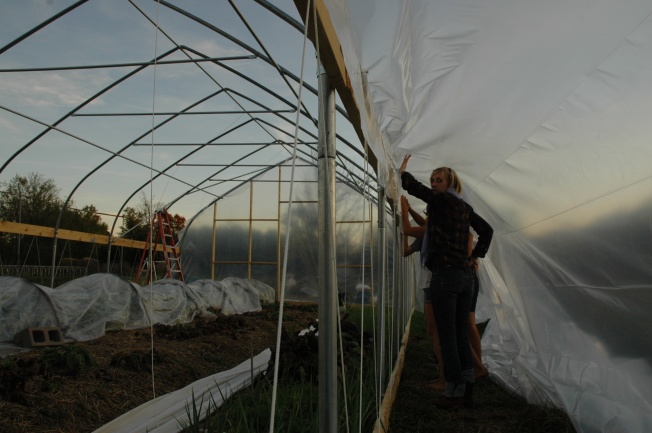 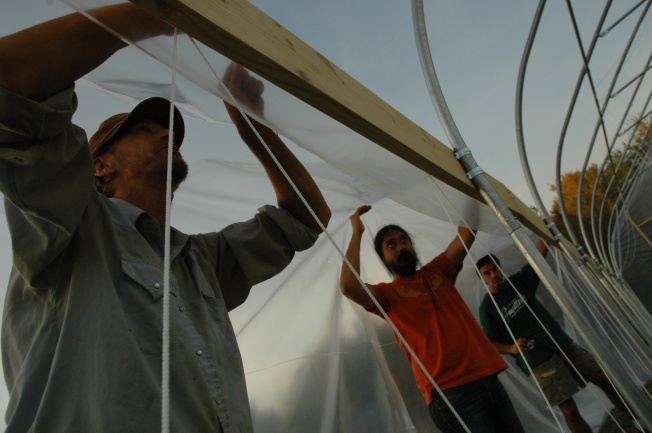 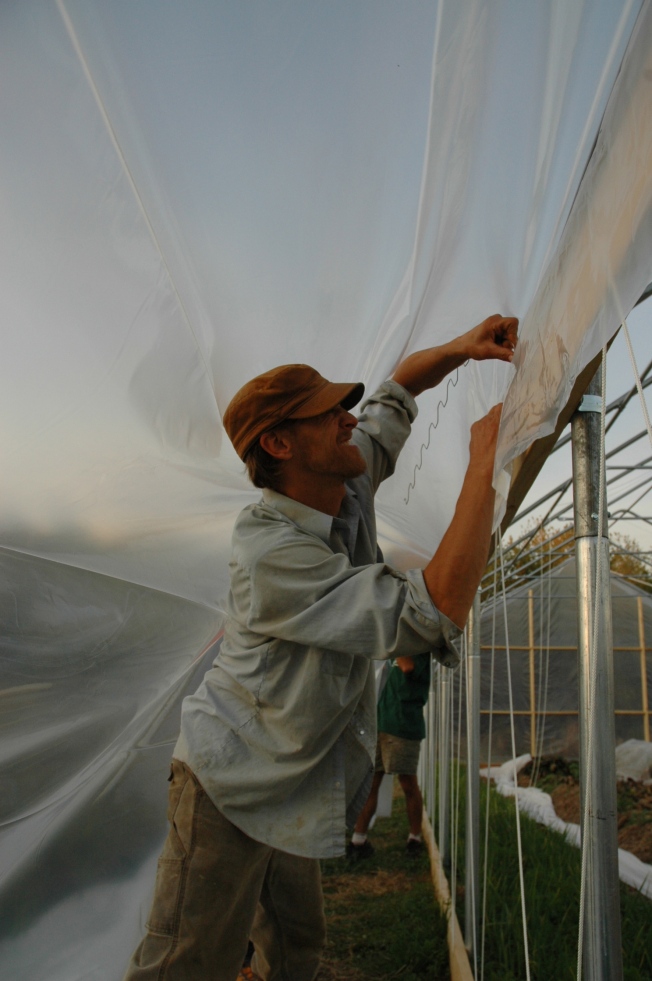 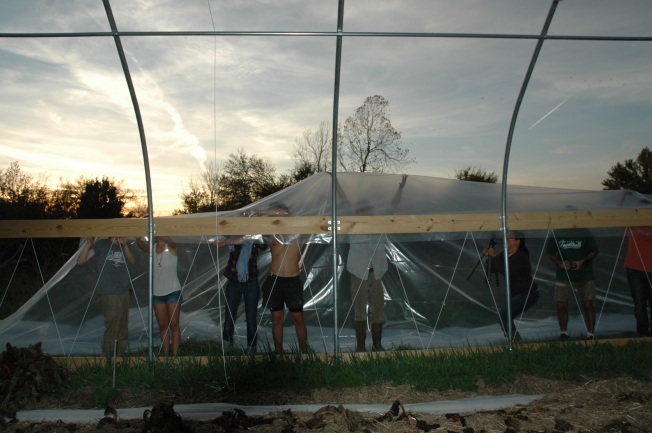 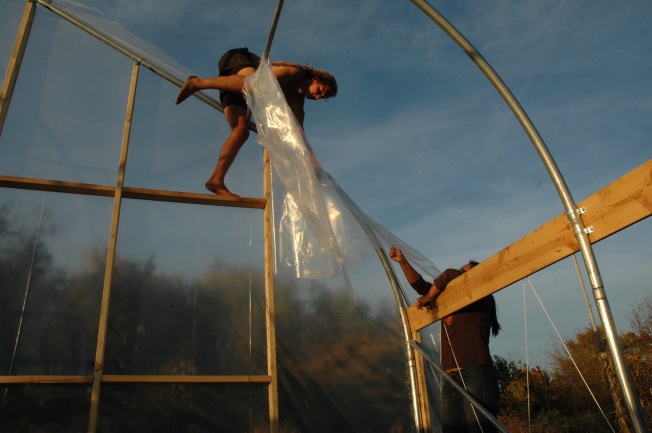 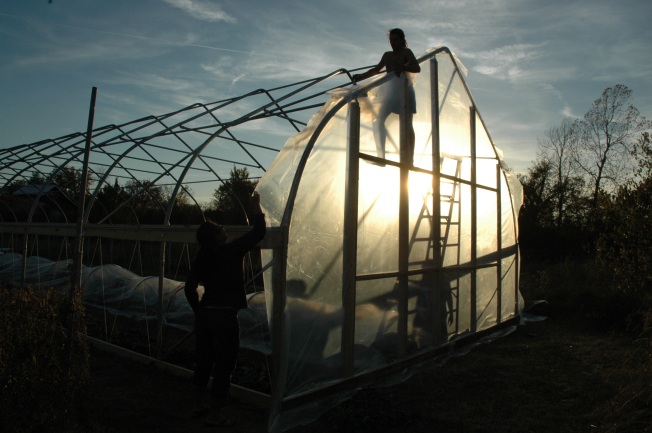 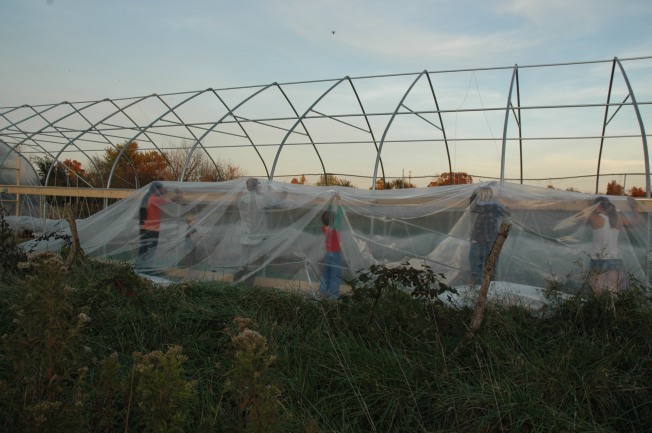 I would just like to add that we also pulled the roof up and over!  There are no pictures of that, because all hands were on deck.  FARM LIFE!

The other evening, we were out, and when we came back there was a present waiting for us. A farm friend from down south in the land of Greenwood Arkansas swung by, waited, and left leaving a very nice present. 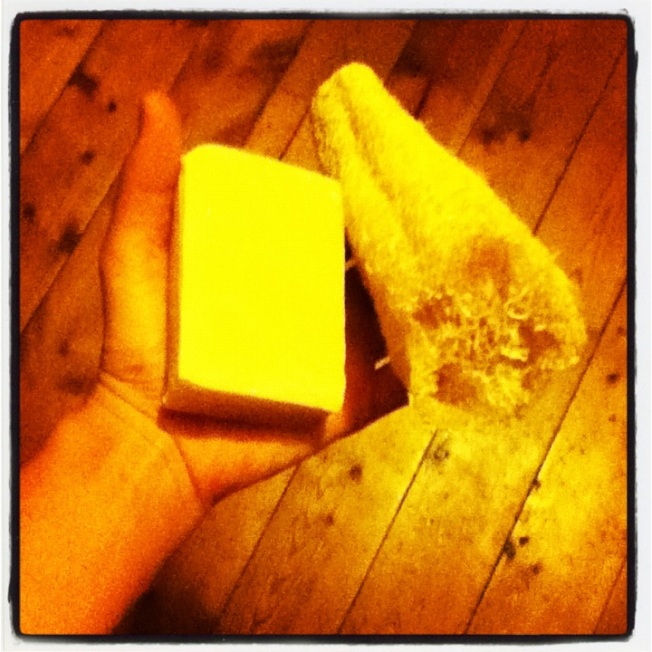 Thank you David for the home-made soap and the home grow loofah!  Are you trying to tell us something?  For any of you locals, David’s wife makes and sells home-made soaps at Ozark Natural Foods here in Fayetteville.  Her brand is called “Dixie Flower Soaps”  They are exceptionally delightful, for we have received some of them before.  So be sure to check out her products on the shelves.

More HEAT, means less harvest and more canning!  The ladies kept up their kitchen wrangling and canned more peppers.  This time we used what gloves we had, which were latex, and that was our fatal mistake!  Note dear reader, that when you can any type of hot pepper, you must MUST wear gloves!  But not just any type of glove I learned.  As we started to chop, we all got the tingles in our fingers, then the tingles turned to a burning sensation.  I said “Gloves OFF!” and we went to the store to buy some blue nitrile gloves, but the damage had been done.  I whipped out my handy iPod touch gadget and looked up pepper chopping and glove choice.  Apparently the molecules of capsaicin are small enough to transfer through the pores of latex gloves, so says the internet, and my burning hands.  So, keep that in mind if you choose to participate in the fun that is canning hot peppers.  Nitrile gloves, or rubber kitchen gloves! 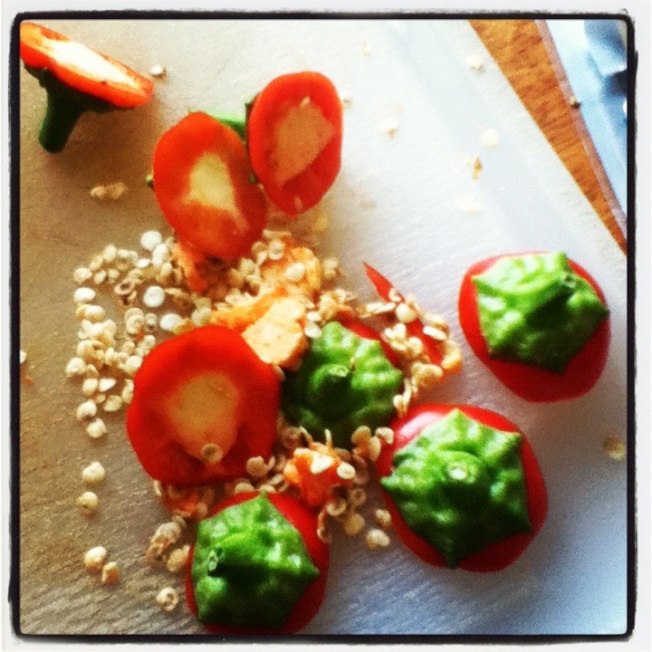 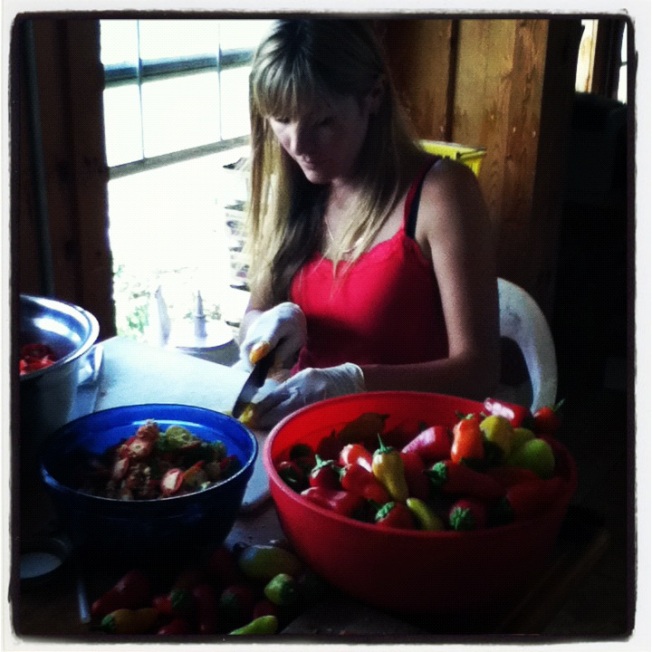 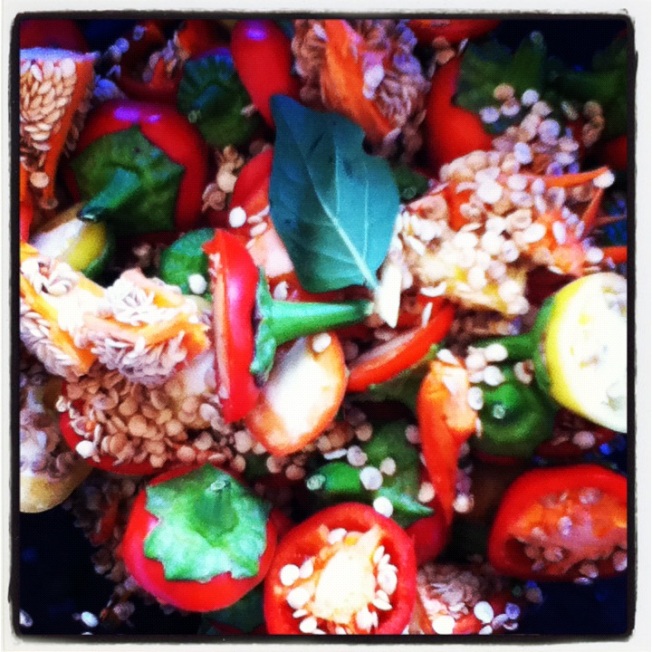 Our method was to de-seed MOST of the peppers, so that there would be some heat in the jar, but that they wouldn’t be so hot that you can’t taste anything for a week.  They turned out pretty good if I do say so myself.  What’s that?  You want to know the method?  Alrighty, I too had to look it up and found an ever so useful blog, where the writer said that she has not worn gloves and been fine, but when her kids want to help, she does wear gloves.  Do yourself a favor and wear gloves.  We canned in half-pint jars, so adjust your recipe accordingly if you decide to go bigger.

For half-pint jars, pack the jar full of peppers, leave a head space.  Add 1/2 teaspoon of canning salt and fill with a mixture that is half white vinegar and half water.  So for a full pint, put in a full teaspoon of salt, two teaspoons if you are canning a quart.  You process in the hot water bath for ten minutes.  It’s the simplest thing I’ve ever canned, no cooking involved!  The prep is what will get you!  So remember the NITRILE gloves. 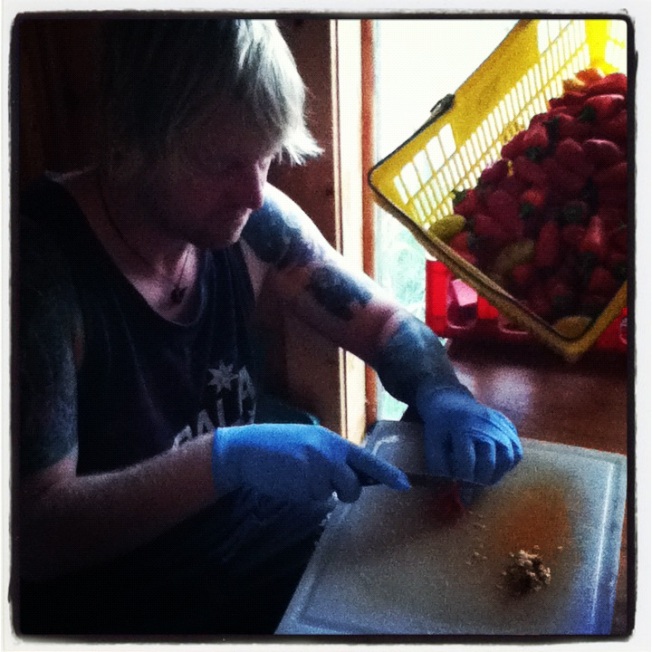 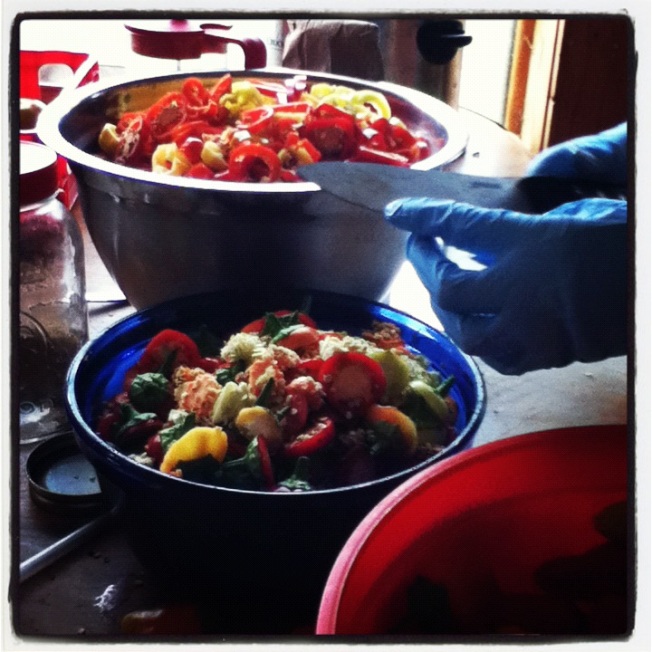 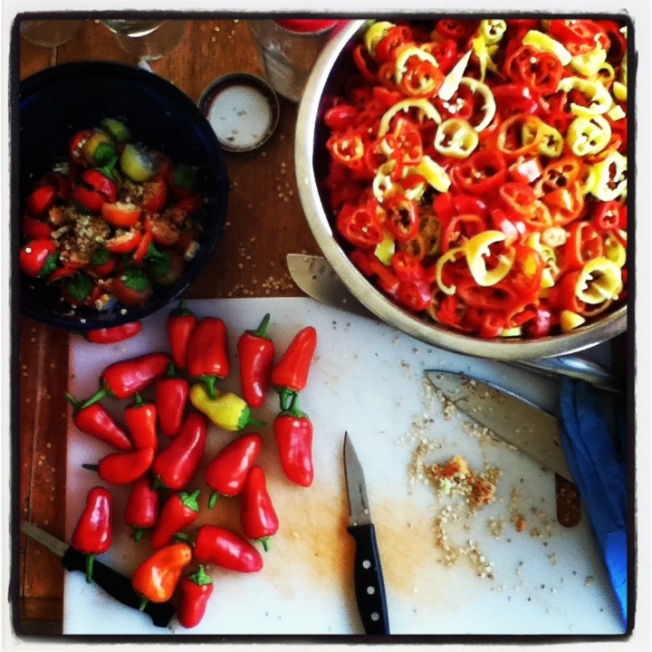 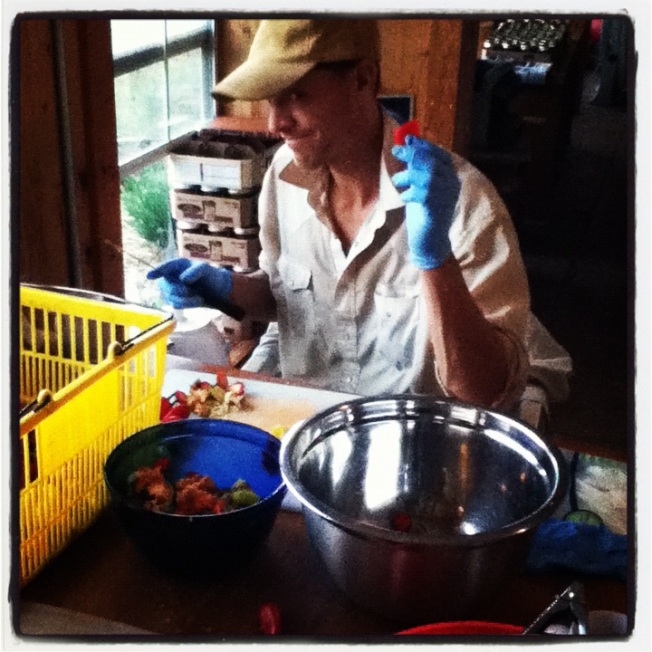 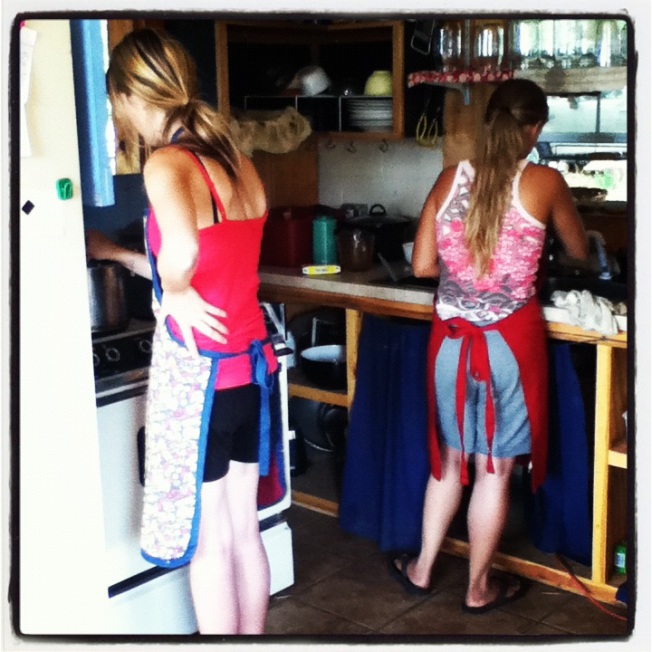 It seems like all I’ve done is take pictures of people working, but don’t be fooled.  I was in there, educating, chopping, and…taking pictures! 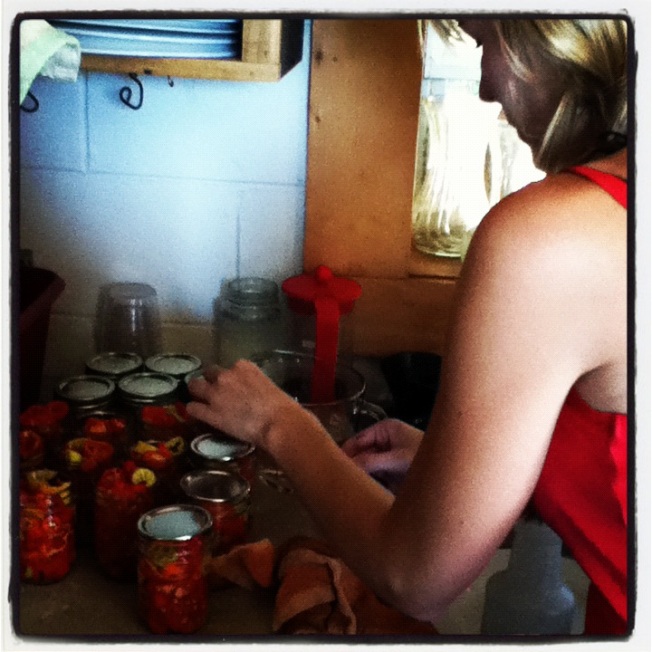 I recommend that you give pickling peppers a try, it’s so easy, and they turned out really tasty!

Growing up in the Central Valley of California, where summer temps reach the 110° F or warmer, I thought I knew heat.  It was mother loving HOT today.  A friend said last night that when you have a fan going in a blistering hot house that you turn it into a convection oven.  Well, I believe I’m fairly well done now.  “They” said that the temps would be between 105°-107°F, yo no sé, all I know is….what was I just saying?  Sorry, I’m a bit sun-scorched.  One day, I’ll live in a house with air conditioning, but right now I’m putting in my time, on this whole homestead thing…I’m earning my stripes so to speak.  Chime in though, tell me I’m crazy. 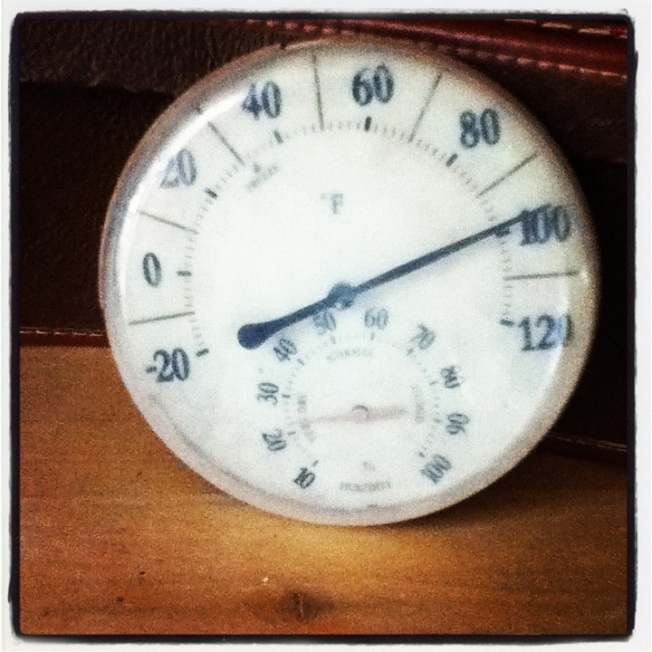 See more pictures, of Heidi, Laura and I doing our thing at dusk, because that’s the way we do it around hrrrr.