When I canned the pickles, it was raining.  It rained and rained and rained.  When it was all said and done, there was 2″ in the rain gauge.  Immediately I went outside and picked our tomatoes because Paul had just watered them in heavily that morning and after receiving the 2″, they had all split open.  So, out came the canner again, with Paul taking pictures for the blog, to give you a little hint about the process.  So here we go.

What I’m doing here, and looking ever so pleased about, is dropping the tomatoes into a pot of boiling water until the skins split.  You fish them out and put them into a bowl of ice water to cool them down and peel the skins off of the tomatoes.  All the while, the canning pot (The big gray pot to my right) is heating up to a boil.

I put Paul on prep duty and constantly had to keep him in check.  He was so adamant about documenting this, while everything else was going on.  Unfortunately, nothing waits for Paul to take pictures and as I’m standing in front of boiling pots, I got a little snappy.  When we’re in the kitchen, I’m in charge.  I will also mention here that everything that is going into our cans is totally “in-house”.  We grew the tomatoes, the bell peppers, the garlic and the onions. 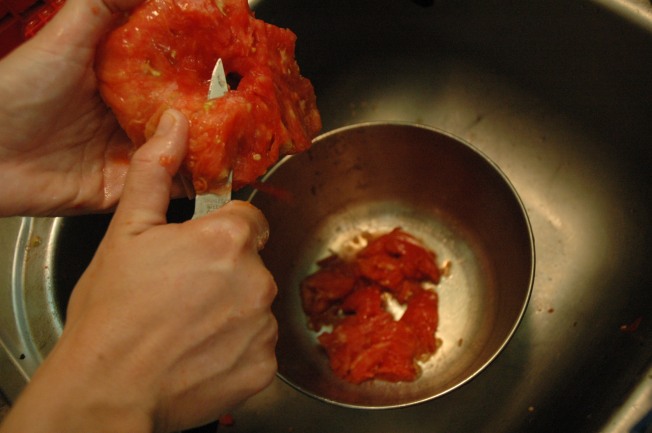 This is more of Paul not doing his job…GET TO WORK!

There is no picture of it, but all of the peppers, onions, garlic and tomatoes were heated up in a large stock pot, until it boiled.  You have to heat up your jars as well and pour the hot tomato mix into the hot jar, which goes into the boiling hot canner.  This is me pouring the mix into the jars.

Rule of thumb here that was taught to me, it makes sense, there are so many types of hybrid tomatoes out there, that their acidity is compromised…these aren’t great-grandma’s tomatoes.  So, to doubly make sure that everything is on the up and up, it’s wise to add a teaspoon of vinegar or lemon juice to each quart before sealing it. 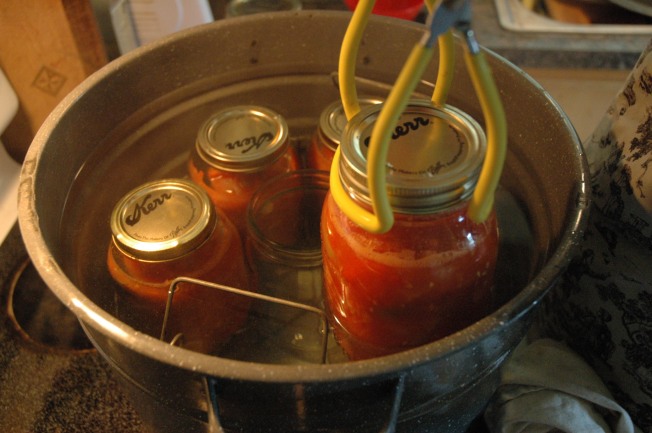 20 or so minutes later, after processing the jars in your canner, you get to take pictures like this.  Canning was taught to me by Paul’s mom, Diane Daniel.  It was right after Oliver was born.  She bought the canner, the tools, the jars, and 40 pounds of tomatoes at the farmer’s market and said “Let me show you something”.  Diane, even though Oliver was four days old and I thought you were totally crazy (in a “I just had a baby” you want me to what? sort of way), I think this is the most valuable skill for any person to know and I thank you for showing me.  Now I’m the crazy, calling up my friends saying “Come over!  Let me show you something!”.