Action Packed Father’s Day in Washington County.  Here’s the link to our Father’s Day news spot.  The clip at 10pm was much better, they gave a shout out to Ozark Alternatives.  This must be the 5pm clip.

There has been so much tat has happened, so, I’m posting pictures…Come visit! I need more volunteers! 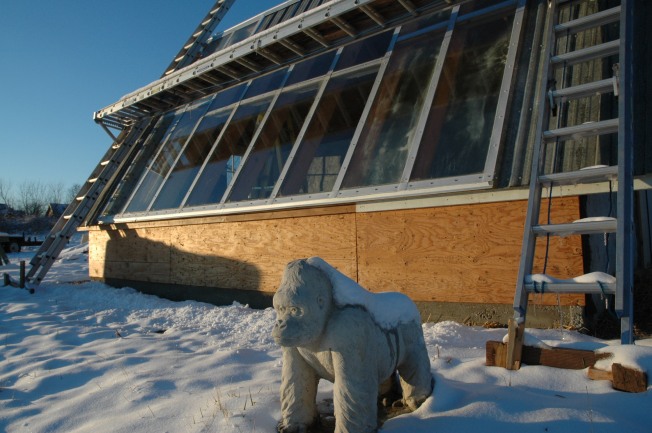 Snow and freezing temps outside, almost 70 inside AND it’s not even insulated yet! 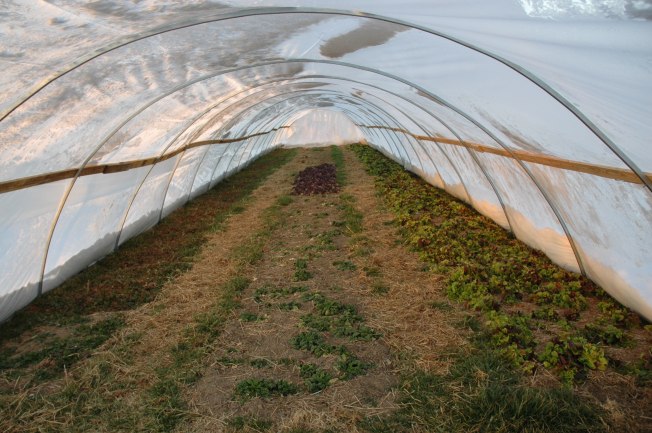 Inside Hoop house, snow on the ground outside. 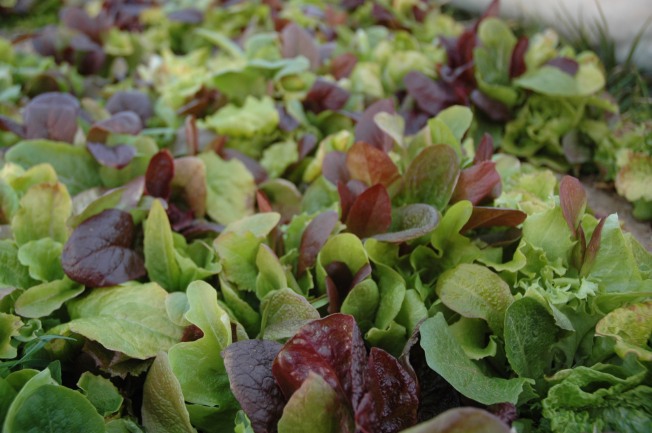 Lettuce on the inside.

A team of tree cutters came through and cut down a bunch of trees lining the driveway because they interfered with the power lines.  This is a group of neighbors helping to clean up the mess that the tree guys left. 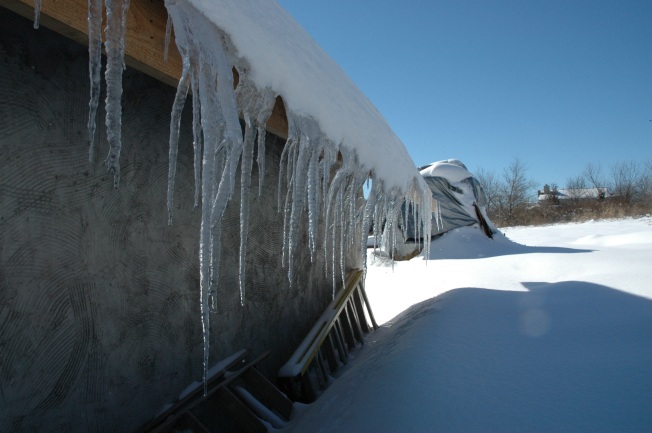 Back side of the greenhouse. 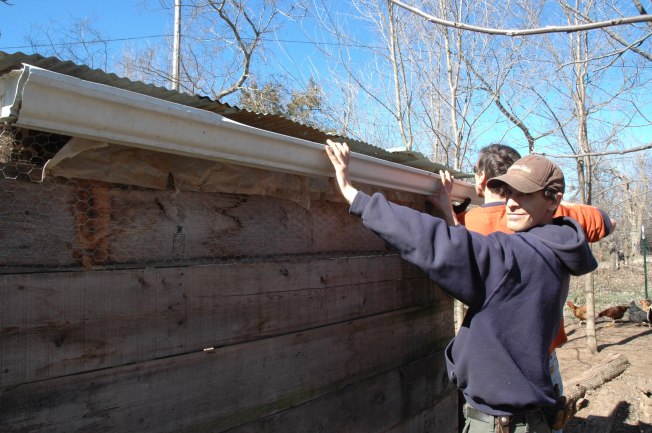 Paul and intern Johnathon putting up a gutter on the hen house to catch water for them to drink. 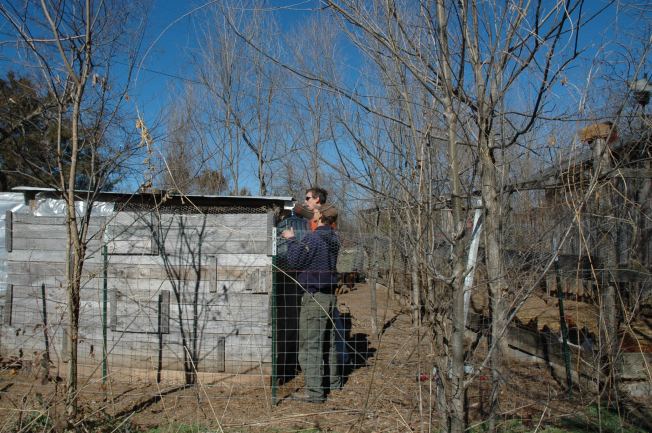 Rose, the first place volunteer in our ever-expanding group of volunteers and Grace, one of our latest WWOOFers getting rid of the lettuce in the hoop. 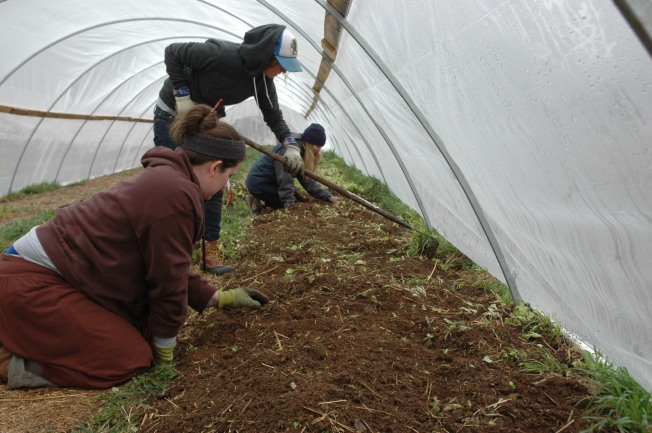 Courtney, WWOOFer #2, keeping it real, building potato beds in Carharts.  And to all of my Humboldt homies, she’s wearing a “Drive thru Tree” hat from Leggett California. 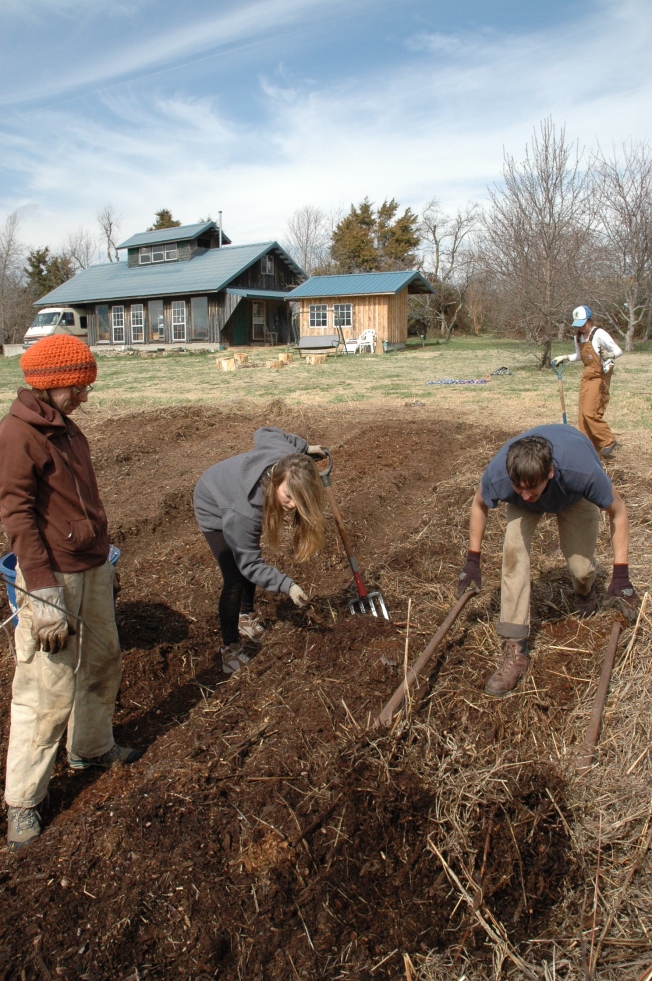 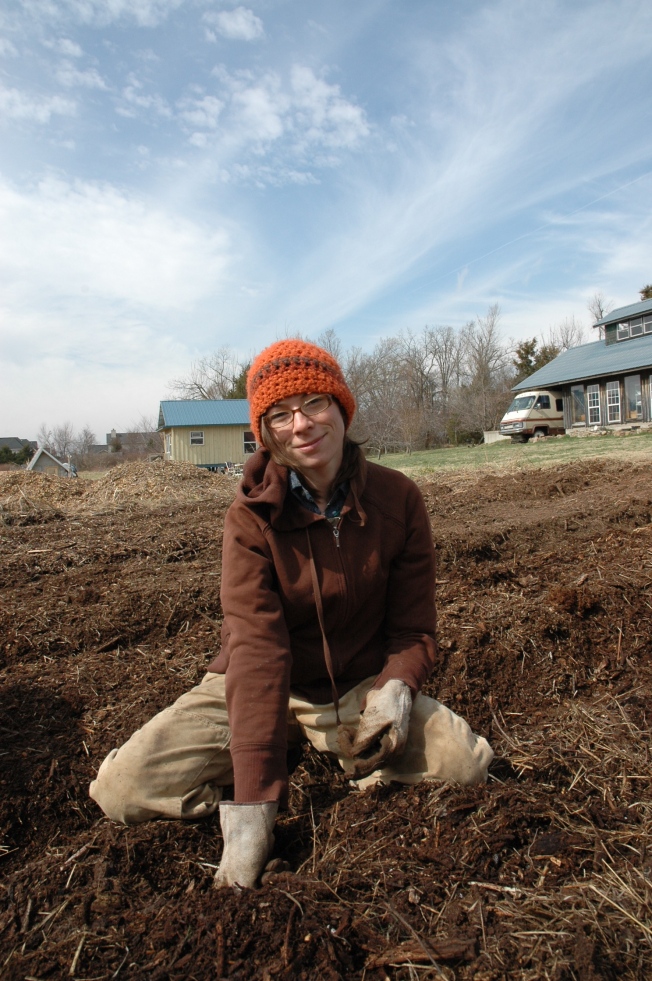 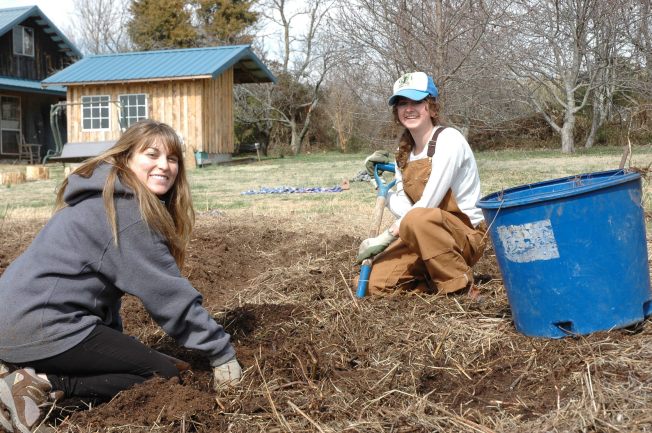 Courtney and Grace stayed for a month volunteering for us.

Stuccoing the Greenhouse was part of the agenda. 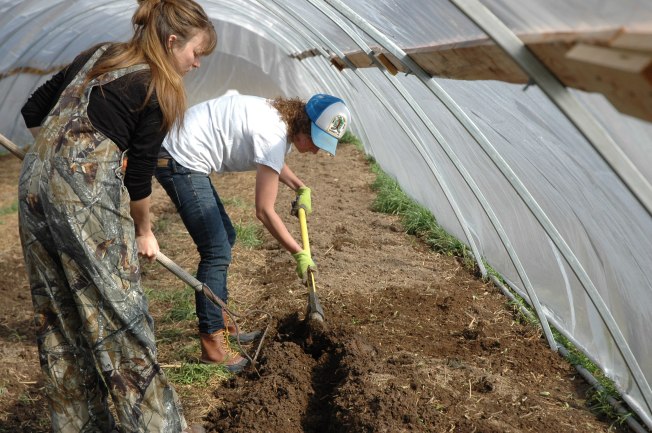 Lettuce out, potatoes in. 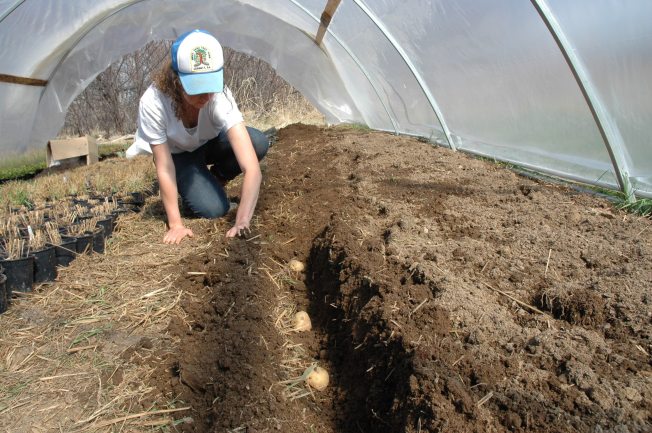 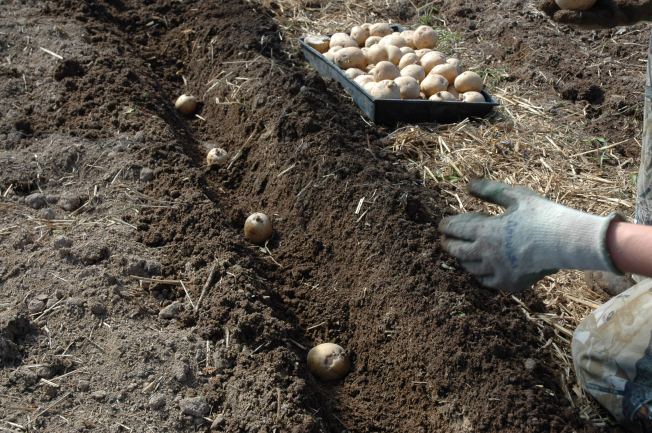 John and another guy, I don’t know his name.  But, he came for a day to volunteer.

Tractor came to plow it up. 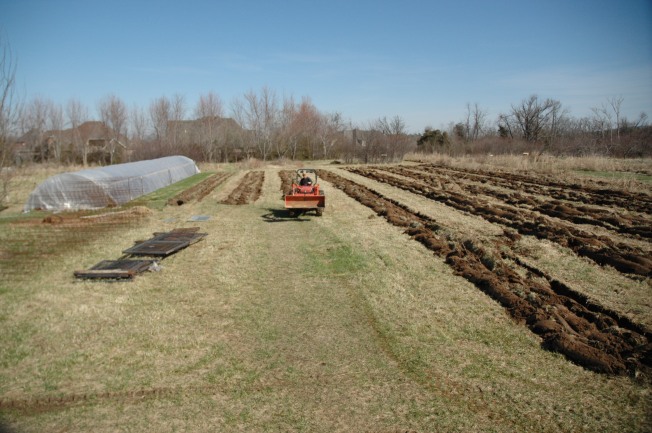 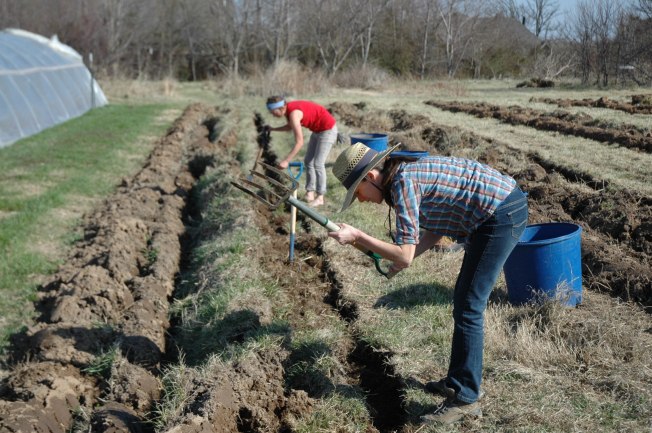 This is Courtney and I getting ready for 26 high school students to come and volunteer.  We’re straight up bustin’.

These students were from all of the area high schools.  They are a part of a program called “Upward Bound”.  Their supervisors found our farm through a volunteer list serve via the University of Arkansas.  I was worried that these kids wouldn’t be into it, but was pleasantly surprised at how into it they were.

So we are turning over the dirt that the tractor plowed, to get rid of the grass and roots.

I gave them a greenhouse tour.  See the girl in the blue?  She was the only one who was not into this farming thing.  She picked at the same clump of roots for two hours.  It’s cool girl, that’s why you’re in that program…you’re a somebody who has options.  Farming isn’t for everybody. 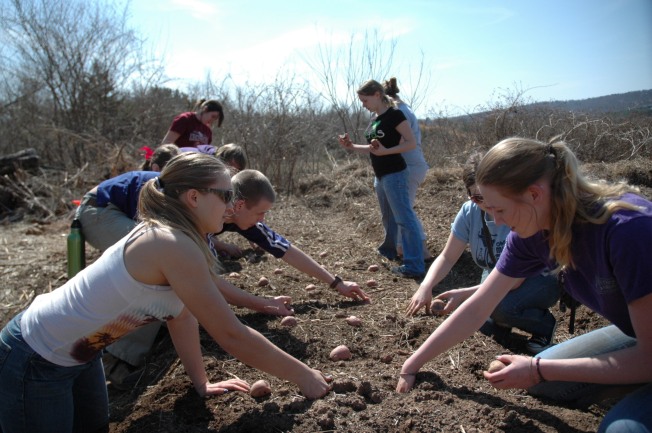 The girl with the sunglasses on told us her sister was “impregnated”.  It was random, and funny, but that’s Arkansas for you.

This patch was tilled up to eventually plant sweet potatoes but for now, it will be an irish potato patch…because the theme of this photo essay is POTATO.

This is Alyssa, she visited us from Ohio for her spring break. 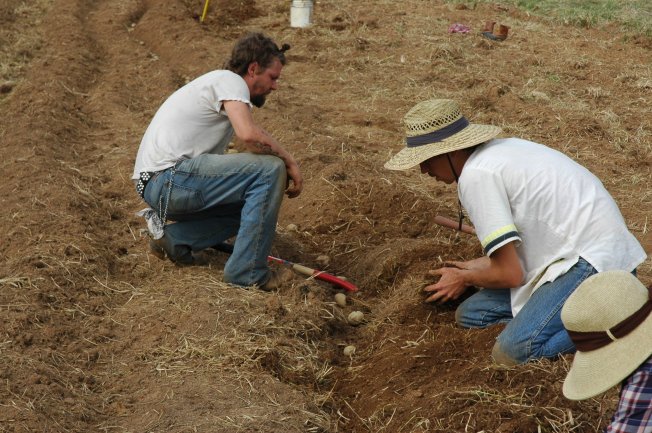 Here’s a better picture of Alyssa.  Thanks for your help girl, it was fun having you. 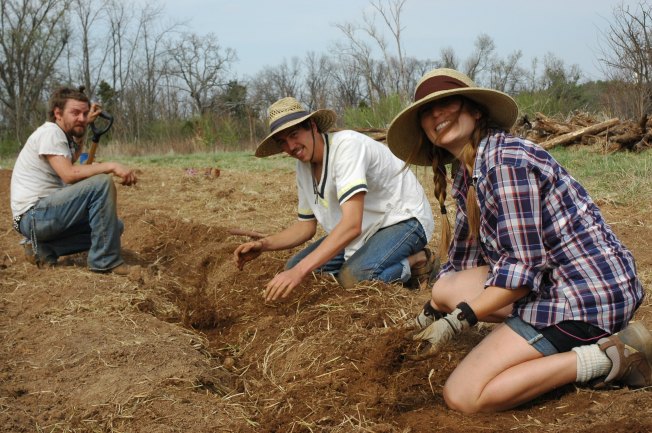 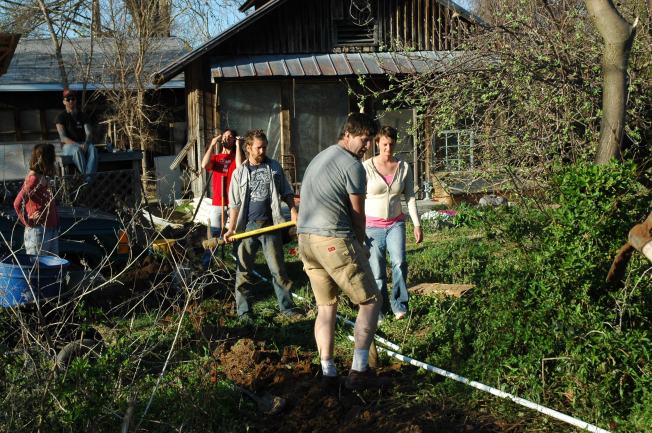 Here’s some community garden action happening.  The group dug a trench and is laying pipe for water spigots throughout the garden. 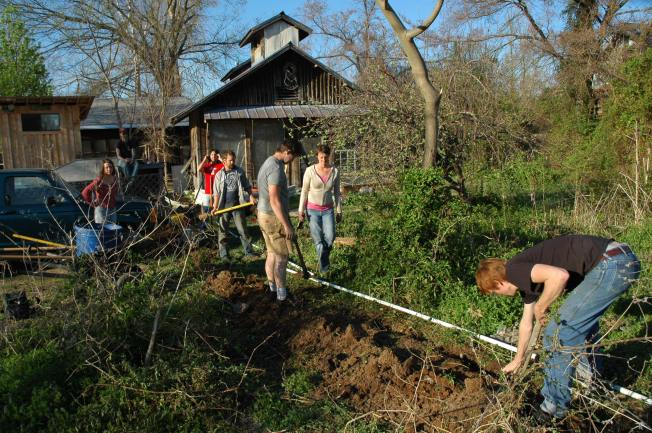 And this was this morning, when Grace and Courtney were leaving.  They are off to Texas, continuing their farm tour of America, and we are keeping on here on the farm.  Best of luck Ladies, you were an awesome help!