Today, Wednesday, it was 95 degrees in the shade.  It was a hot one.  I was singing the praises of the heat, because it has been extremely mild in this part of the world for July, and everyone was talking about it.  The radio said there was a 20% chance of thunderstorms.  Well, BINGO!  I was in the garage on the ole’ interwebs when I heard a thump and bump, a loud bump and thump.  It was so loud that I thought it was a tree limb or something.  I look out the door and I see MASSIVE HAIL dropping out of the sky.  I yell out to Paul, he already had his video camera.  It was very scary.  Scary because I’ve never seen anything like this before…I seem to say that a lot about freak Arkansas weather phenomena.  Scary because you see these giant chunks jettisoning from the heavens, slamming into the roof, slamming into the ground.  The horses across the way were jetting around trying to find shelter.  People, something like what I saw could kill you.  If you figure a GIANT chunk of ice falling from, I don’t know, 10,000 feet?  20,000?  It was no joke.   All we could do was stare up at the sky.  It was dumping rain.  The rain gauge reads 2.5″, but Paul thinks there might have been rain left over in it from the last time it rained, I have my doubts.  It went on for about an hour, afterwards the lightning continued and I was worried that it was tornado weather.  Here are some pictures. 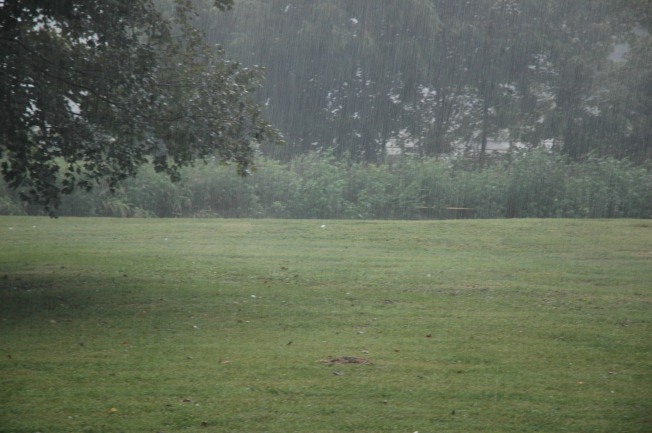 There is a white speck out on the edge of the lawn.  From my front door to the little white speck is about 200 ft.  That piece of hail weighed 1/3 lb. 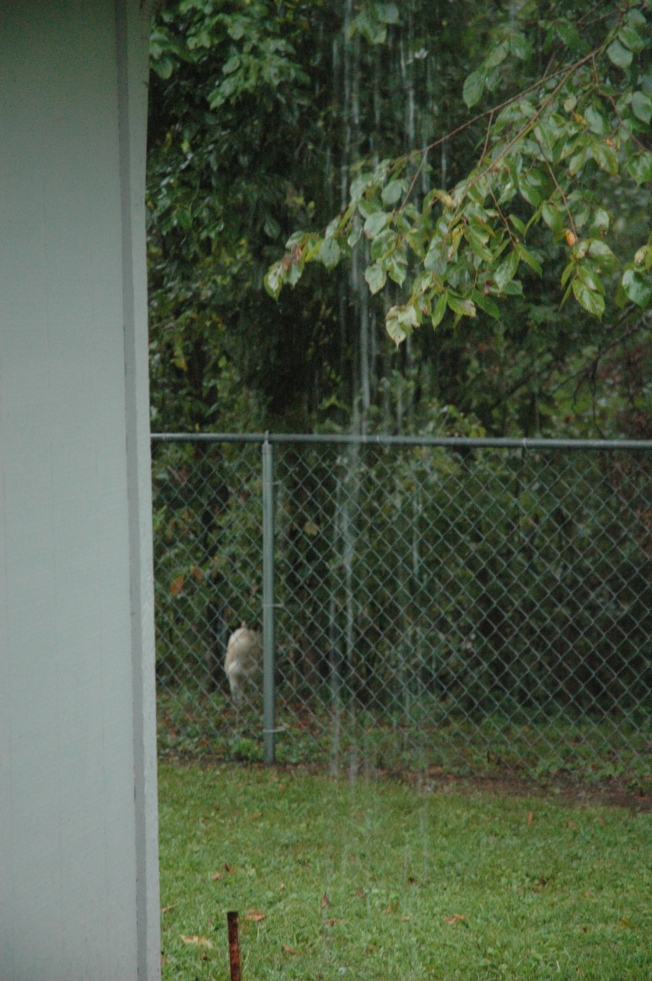 This is poor little Peter, who took shelter under a tree.  I worry about him now because the creek is up. 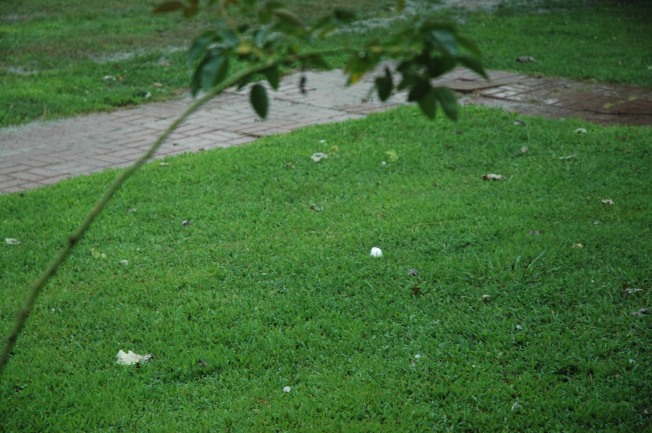 Here is another giant chunk in the yard. 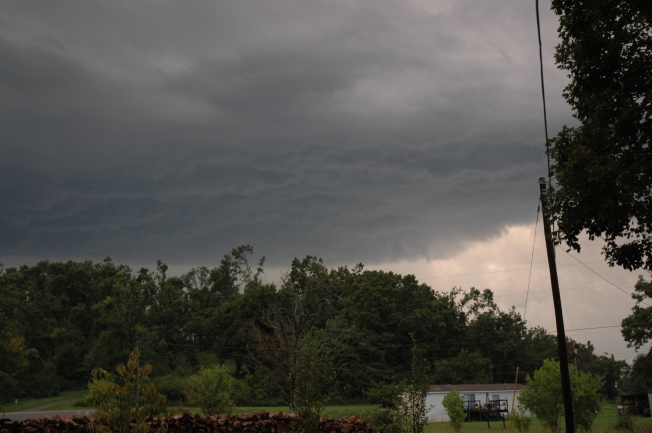 So, I’m standing in my driveway and start taking pictures in a 360 degree radius.  This is looking west. 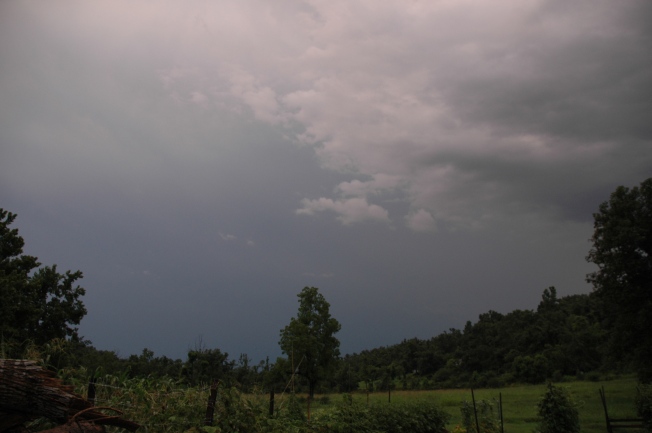 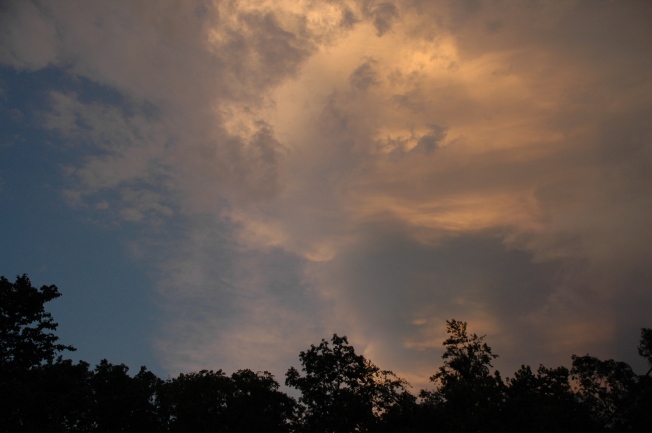 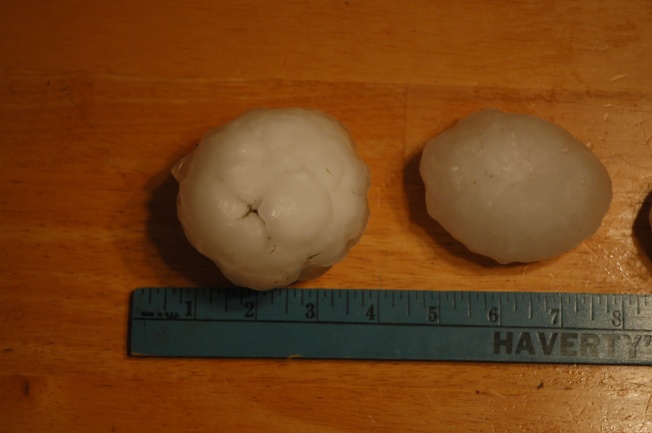 Say what you will, but I do believe this is the largest hail I’ve ever seen.

What I find so interesting about hail, is that the two time I’ve experienced hail larger than a pea, it has been 95+ degree weather.  Along comes a thunder storm, the temperature drops 20 degrees and the ooblick starts to rain from the sky.  It doesn’t make sense.  I mean, I’m sure it does, but I felt like the kids in the movie Jurassic park and the look on their faces when they see the T-Rex.  It’s otherworldly.

Yes, that’s an apple.  I have a wide angle lens on my camera so it throws off perception of scale sometimes, I’m telling you, this hail was otherworldly!  I have already mentioned, but I’ll say it again.  This particular chunk weighed 1/3 lb!

How’s that to wind up Wednesday!